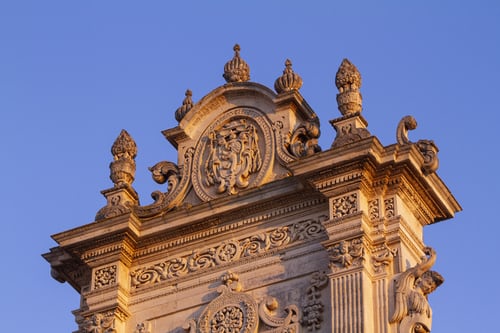 The lady of the Baroque
In the central northern part of the Salento valley is located Lecce, a town rich in testimonies and art works from the Roman, medieval and Renaissance periods. It is one of the most beautiful art cities in southern Italy. Refined buildings and interesting handicraft shops, monuments and churches have made this city the "Lady of the Baroque". It is precisely the Baroque art that characterizes the spires and gates of the historic center. The streets of the center, in fact, are a real open-air museum such as the Piazza del Duomo, the Palazzo Vescovile and the Palazzo del Seminario. Lecce is also famous for its stone, the "leccisu", used both in the architectural and sculptural fields. It owes its particular processability to the presence of clay, which allows modeling on the lathe and even manual. Appreciated in the artistic field, it has reached international esteem thanks to the local crafts that throughout the centuries has produced the complex architecture of the Lecce Baroque. Notable examples are the friezes, capitals, pinnacles and rosettes windows that decorate many of Lecce's palaces and churches, such as the Palazzo dei Celestini and the adjacent Church of Santa Croce, the Church of Santa Chiara and the Duomo. Also known as "the Florence of the South", comparisons are not necessary for this city that knows how to astonish and fascinate tourists and visitors. Welcoming, tidy, with great gastronomy and a spectacular sea just a few steps away, Lecce is one of the unmissable destinations to visit in Italy.