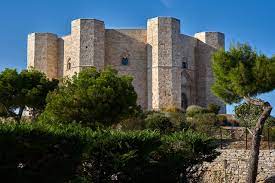 The ancient fortress of Frederick II of Swabia
At 540 meters above sea level, dominating the western Apulian Murgia, stands Castel del Monte, an ancient octagonal-shaped fortress, built by Frederick II of Swabia around 1240. This suggestive Apulian castle stands out in the Murgia like something out of a fairy tale and gives unique emotions to its visitors from all over the world. According to many, its octagonal shape would resemble that of a crown, representing the imperial power of Frederick II. On each of the eight corners of its plant are inserted eight towers, also octagonal. This castle combines different design elements: from Romanesque, to Gothic, to classical, up to Islamic refinements. Constructed of marble and calcareous stone, this building impresses with its light color and unique aspect. An enigmatic place, with its geometric shapes. Many historians attribute to him the most diverse functions: temple, library, location for spiritual retreat. In reality, Castel del Monte was a hunting lodge created for Frederick II's strong passion for falconry, which is why it stands at the highest point of the Murgia. It is possible to visit Castel del Monte from the inside but the most evocative aspect is certainly the environment in which Castel del Monte stands: the Murgia. Here it is possible to taste the delicacies of the territory in the numerous farmhouses (most often at km 0) and immerse yourself in unique experiences such as horseback riding, food and wine tours and wine tastings in the local wineries. Enjoy!